How to Get a Boyfriend ?

Boys are very complicatedâ€¦ they are not like women as you can read more of it at www.womendiary.net, and they do not just want to be used as fashion statements. So if you want a boyfriend, make sure that you like him and are willing to be in a serious commitment with him, or at least you feel you may be if you get to know him better, and wonâ€™t break his heart. Below are some things that show ways to get your man by your side as your dating

First, if you do not already know him, then introduce yourself. If he is interested in you enough to want to get to know you better himself, he will add in some women conversation eventually.

Show him interest in his life.
Make it easy for him to be friendly and talkative with you, but not overpowering.
Invite him to a partyâ€¦ but not just to make out with him or anything, be friendly with him alone until he makes it clear that he really likes you, and wants to be around you.
At this point, just be yourself and let things unwind themselves.

If the person you like is shy, then be very gentle to him but admire him for his strengths, few men can resist being told how manly they are unless the girl who tells them is one they are very uninterested in.
Do not be afraid, if you feel you can go up to him without him bashing your heart against the wall (whether on purpose or not) and you notice his seeming interest in you, then you are probably okay.

And..
Do not use himâ€¦ boys may be bad about using women, but they can still be weak around an irrisistable women even if they are not interested in her, which means breaking your heart and merely adding on his horrible guilt, or having a stalker who wants you for the WRONG reasons. So do not parade yourself around boys too much, for both your own good and their own good and your dating. 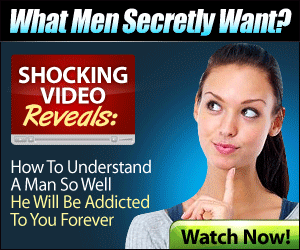